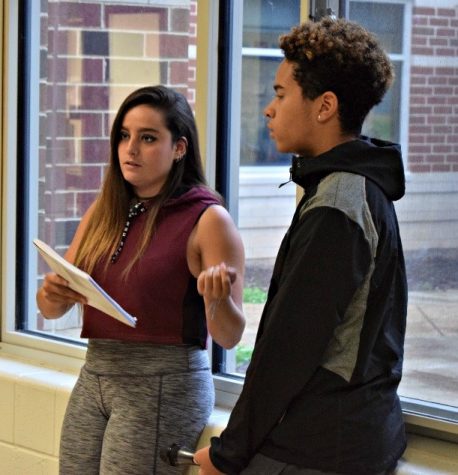 Yearbook
Students in the film analysis class had the opportunity
to Skype with movie producer Steve Longi.

Videos can spread funny content, share important information, or simply make people smile. But the most meaningful videos are those that send powerful messages.

The film analysis class is an award-winning class in which students create short films for competition. In addition to learning about the history of film, students also learn how to shoot, edit and put together different types of video. Most of the videos that are created are then entered into a statewide competition.

The Virginia High School League holds a film festival each year to showcase talents of students across the state. The film festival takes place in Richmond, VA.

“I’ve designed the class around the film festival,” film teacher Shelly Norden said. “For the past two years, we’ve submitted an animation, narration, PSA and documentary. We’ve had two films selected as finalists in the film festival.”

This past summer, a PSA created by Leah Butts, Andrew Richmond and Julia Rocca was selected as a finalist and was featured in the VHSL Film Festival. The public service announcement warned viewers of possible hearing loss that could result from having headphones turned up too loud. Out of more than 50 entries, the PSA was chosen as one of the top eight.

“I love the creativity of so many of the students,” Norden said. “It’s a project based class so students really have the freedom to create videos on things that interest them.”

Richmond learned a lot in the class. “We were taught all about different types of shots and stuff like that,” Richmond said. “My favorite part was that we didn’t really have a rubric, so we kind of just did what we wanted.”

Former film student Rutger Scott feels he improved his filming skills while in the class.

“It was a good experience,” Scott said. “I liked the people in the class. It helped my level of cooperation with other people while filming.”

“My experience was really, really good,” junior Tyler Marshall said. “There were things that I could’ve done to make the activities and work flow better, but overall it was really exciting. The class really showed me how simple it can be to put all the different components of film together. It improved my knowledge of the filmmaking process.”

After taking the class three years ago, James Madison University junior Claire Downey decided to turn her love of film into a career.

“I recently was accepted into the SMAD [School of Media Arts and Design] program at JMU with a concentration in digital video and cinema,” Downey said. “If I hadn’t have taken Mrs. Norden’s film class my last year of high school, I wouldn’t have realized my passion or affinity for the filmmaking process.”

The film analysis class teaches students more than the basics of filmmaking. Students also learn how to work collaboratively with other students.

In addition to two of the films being finalists in the VHSL Film Festival, students in the class have also earned top ratings in the Virginia School Board Association’s annual PSA competition.