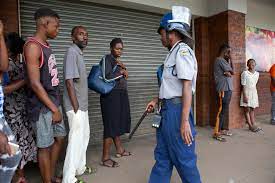 On January 5th, Zimbabwe’s government announced a 30-day lockdown, leading to the loss of livelihoods for informal street vendors. This has led to a massive increase in food insecurity for the people of Zimbabwe, an already disproportionately impoverished population as a result of country-wide drought and deepening economic crisis.

The severe restrictions include a ban on travelling between provinces, a curfew, a mandate for government offices to operate with only 10% of its normal staff, and a total shutdown of all private businesses. However, on February 15th, Zimbabwe’s President Emmerson Mnangagwa extended the shutdown by two weeks, along with some other revisions to the original restrictions.

The ban on inter-provincial travel remains, the curfew was shortened from 12 to 9 hours, government staff levels were increased from 10% to 15%, and private companies were allowed to open while strictly observing World Health Organization guidelines.

“The COVID-19 pandemic is making it especially hard for poor families to afford a nutritious diet, with lack of incomes, remittances and stressed livelihoods having a ruinous effect on vulnerable communities,” said Claire Nevill, spokesperson for the World Food Programme.

An estimated 90% of Zimbabwe’s population are unemployed and holding informal jobs, so the severe restrictions placed on Zimbabwe’s workforce by its government have an enormously negative impact on the vast majority of the citizens of Zimbabwe.

A UN food agency estimates that 50% of Zimbabwe’s urban dwellers, or 2.2 million people, are going to bed hungry at night.

This is in addition to a report that 3.4 million Zimbabweans, including some ⅓ of rural dwellers, are expected to face “crisis” levels of hunger in the first quarter of this year.

Though these major lockdown measures are having brutal effects on Zimbabweans, they seem to be too much too late, as the number of covid-19 cases this year are already beating their numbers for all of 2020. That they are successful at keeping cases of covid-19 to a minimum is debatable.

According to a study at Johns Hopkins University, there have been 35,000 documented cases of coronavirus in Zimbabwe with 1,400 deaths in total, with only 409 of those cases being diagnosed in 2020.

“The lockdown has been very hard on me and my family,” said Tapiwa Kayse, a 28-year old vendor and father of two in Harare, Zimbabwe. “I had to decide if I want to earn money or starve at home.”