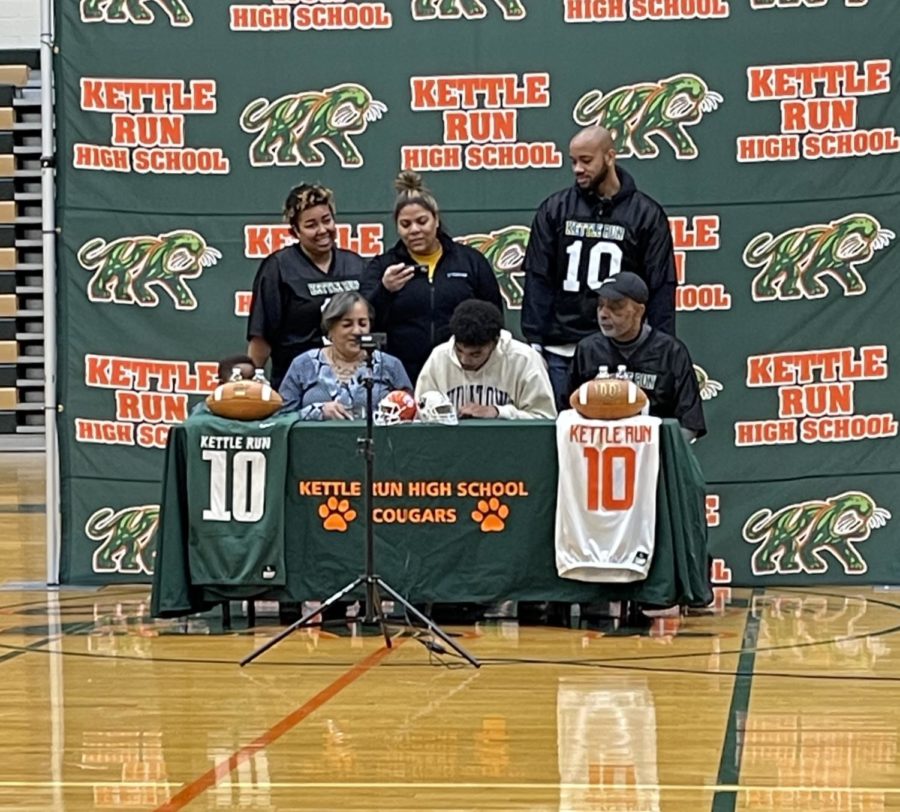 On February 2nd, 2022, three of our Kettle Run Cougars’ have committed to continue their athletic and academic careers in college; Jacob Robinson and Zach “Big Country” Thompson both committed to Emory and Henry College, an NCAA Division 2 school, to play football together. Colleen Schaner committed to Arizona State University for Track & Field, an NCAA Division 1 school.

Jacob Robinson has been playing football since his sophomore year. The second he joined the team he was a true natural and immediately an intricate part. Jacob committed to playing Saftey in college, but many of the people that attended the games knew he was a very skilled receiver as well. According to Hudl, Jacob had 36 total tackles, 2 interceptions, 1 sack, 4 tackles for loss, and 1 forced fumble on the season.

Zach Thompson has been playing football since his freshman year; he’s one of the most powerful players on the offensive line and incredibly important to how the team has performed this year. At his time here, he predominantly played offensive tackle. When making his decision to Emory & Henry, he’s committed for all of the offensive line, so he could be moved around.

Because Zach and Jacob are going to the same college, and are very good friends and teammates, they plan on rooming together. “I’m ecstatic about committing with Country. (Zach) We’ve been together for three years, now we’re going for four more,” Jacob stated.

Both Zach and Jacob have many goals they want to accomplish in college. “We’re trying to get a national championship and we both are going to work from the bottom and become freshman starters,” they stated.

Colleen Schaner mainly pole vaults for our Track & Field team. She states that it has been one of the most life-changing and challenging experiences she’s been through. She’s been a member of the track team for all four years of high school and continuing her career at the Division 1 level, which is an extremely impressive feat. She has worked insanely hard to reach this level, making trips all the way to Mechanicsville weekly to practice with teammates in an indoor facility.

Colleen doesn’t just credit herself with these accomplishments, but her teammates as well. “I want to mention Ashley Nickerson and Kaleb Leigh; they are my two extraordinary teammates and friends and are absolutely the best people to know and vault with,” she mentioned.

We asked her about how she felt about committing and she said this: “Honestly, it’s kind of weird, it’s like I can and can’t believe it! Other than that,  though, I’m mainly grateful and elated. I feel so blessed and honored to be able to say that I’ll be part of such a great team and great school. In the end, I’m confident in this decision and I believe it will do great things for me and my pole vaulting career. I’m simply excited and ready to give it my all.”

These three Kettle Run Cougars are making huge accomplishments and we all know that they’ll exceed in college!