The Bengals and Rams Fight for the Lombardi Trophy 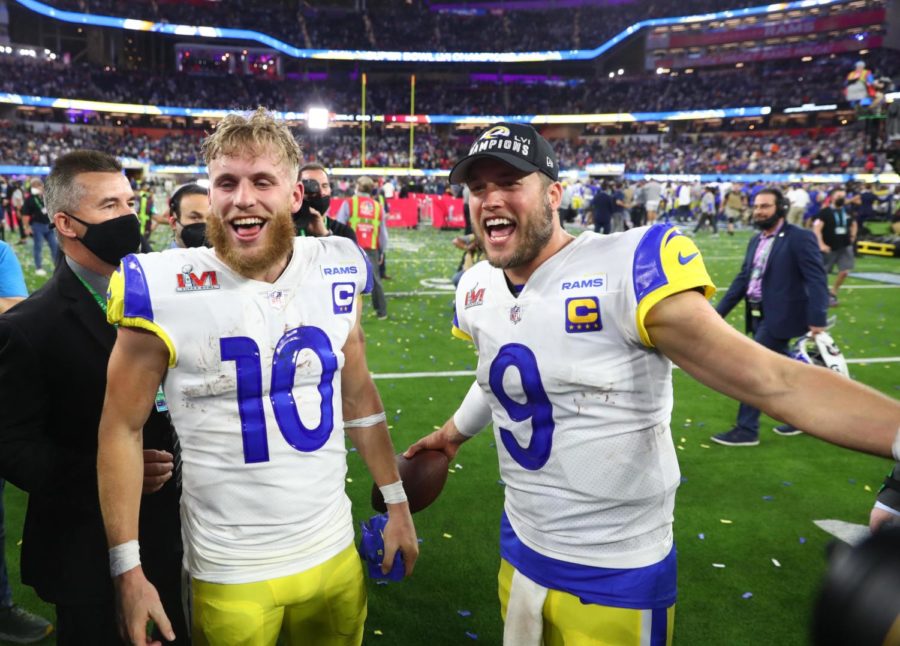 The stage is set for Sunday, February 13th; the Los Angeles Rams will face the Cincinnati Bengals at SoFi Stadium.

This seasons’ playoffs have been extremely exciting and surprising to all fans of the NFL. Cincinnati has unexpectedly won their way to the Super Bowl and defeated the Kansas City Cheifs. Joe Burrow has proven himself to be an elite quarterback in just his second season, Jamaar Chase, a rookie, has put up historic numbers in his very first season, and the Bengals defense has been outstanding.

The Bengals have only had one Super Bowl appearance in 1988 and ended up walking away with a loss, so the city of Cincinnati is incredibly excited and has been putting up decorations to commemorate the team for their accomplishments.

The Rams have won one Super Bowl in 2000 when they were located in St Louis; they have also appeared in one other Super Bowl but lost to the Patriots. The sports teams of L.A. have won 2 championships in the last 2 years, one NBA title with the Lakers and one MLB title with the Dodgers. Rams cornerback Jalen Ramsey said “The Lakers did it. The Dodgers did it. We want to do it as well.”

Even NFL fans who aren’t loyal to these teams were very excited about this matchup. Many fans are tired of teams repeating appearances in Super Bowls ever since the Patriots dynasty started, so to get two teams who haven’t been in the Super Bowl in over 3 years was very refreshing.

When the time finally came, The Rams started out fast, with Odell Beckham Jr. scoring on their first drive. The Bengals, however, had quite a slow start. Their first drive resulted in a turnover on downs, and they could only manage to put up 3 points in the first quarter.

During the second quarter, the Rams scored another touchdown with Cooper Kupp, this year’s offensive player of the year; they failed on the PAT due to a bobbled hold, making the score 13-3. The Rams also lost Odell to a knee injury this quarter. The Bengals then responded with some trickery; After a handoff to running back, Joe Mixon, he passed the ball to Tee Higgins in the endzone, leaving the game at 13-10 to end the half.

This year’s Super Bowl halftime show was unique, in fact, it was the first halftime show to feature primarily hip-hop musicians. The show starred Snoop Dogg, 50 Cent, Dr. Dre, Eminem, Mary J. Blige, and Kendrick Lamar. One of the most notable parts of the show was 50 Cent appearing upside-down when performing “In Da Club”, making reference to how that song’s music video starts.

Coming back after the half, the Rams were sluggish and only managed to put up one field goal. The Bengals were able to put up 10 points that quarter with a deep pass touchdown to Tee Higgins for his second touchdown of the game; this play was very controversial, as there was a blatant offensive pass interference that wasn’t called. The third quarter was big for the Bengals as they took the lead, making the score 20-16.

The fourth quarter was huge for the Rams because they were trailing to start. With a huge defensive effort, the Rams were able to pinch a fourth-quarter shutout and their offense was able to score with a pass to Cooper Kupp. In the last few plays of the drive the controversy continued when the referees called multiple penalties that resulted in numerous replays of first down for the Rams. After the touchdown, the Bengals still had about a minute and thirty seconds to score. During the final seconds of the game, the Bengals had a 4th and 1 to convert on, they elected to pass but Aaron Donald was able to sack Joe Burrow, effectively ending the game.

After the game Cooper Kupp was awarded Super Bowl MVP, completing this historic season with a bang. Kupp was able to get the “triple-crown”, OPOTY, and SBMVP, the only other receiver to do this was Jerry Rice. The difference between Rice and Kupp is it took Rice his entire career to accomplish this, but Kupp did it in a single season.

This year’s playoffs have been the best playoffs we’ve seen in recent years, it was only right it would end off with a Super Bowl this exciting.