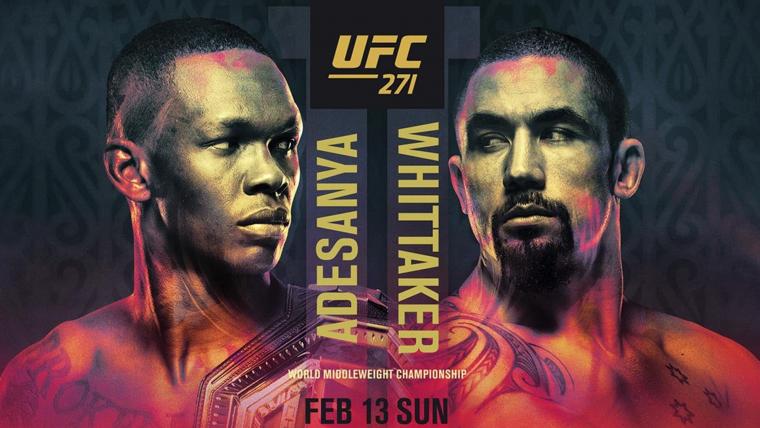 The title match for UFC 271 Title card featured Israel Adesanya and Robert Whittacker 2. This match was the highly requested rematch for both sides of fans due to the intensity of the last fight eleven though it was so short. This highly anticipated and intense rematch between these two top competitors and rivals had finally come to the eyes of the viewers in a stunning 5 round fight that went the distance. This was a shock due to the outcome of their first encounter. Many people were expecting an early stoppage yet again with Israel Adesanya taking the victory early in the match. This showed with Israel Adesanya being the “favorite” in the match with betting odds for Adesanya with Whittacker yet again being the underdog. Gamblers would need to put up 270 USD to earn 100 USD when betting for Adesanya. Coming into the fight, Israel Adesanya’s “The Last Style Bender” record stood at 21 wins and 1 loss with Robert Whittacker “The Reaper” coming in with 24 wins and 5 losses. Though Whittacker has more bouts in the UFC ring, Adesanya proves again why he is the undisputed middleweight champion of the world.

To start off the night, Whittaker makes his way to the octagon in his usual way as Israel Adesanya took a different approach. Adesanya would usually put on a show and have a rehearsed performance for his fans but this time there was nothing. Israel Adesanya said he did not do anything because “It was all business” meaning this was serious. During the first round, Adesanya and Whittaker went back and forth not attacking much but just feeling each other out and finding their distance. But with 1 minute and 50 seconds left in the first round, Israel Adesanya threw a left straight punch down the middle of Whittackers guard which dropped the challenger. This strike was an immediate call back to what had happened in the first fight but instead of charging in and trying to finish the match early, Adesanya watched his opponent as he got up knowing he was not done just yet. For the rest of the round, they traded kicks and punches with Adesanya mostly dominating the first round. During the second round, the first half was mostly a repeat of the first with them trading blows trying to set up heavy shots but with 2 minutes and 45 seconds left Whittacker goes for a takedown which is successful. He was able to tackle the Champion and score a takedown but Adesanya was up quickly after getting right back to his feet. Though Whittacker may have scored the takedown, this round still looked to be controlled by Adesanya. For the third round, something odd happened. Whittaker was able to get to the champion’s backside and grapple him but they were not on the ground, they were still standing. This forced Adesanya to walk over to the cage and pry him off with it. After this, Whittacker started to unleash more punches and possibly steal this round. With only two rounds left, Whittacker would have to come out strong and he did. Whittaker came out swinging landing two heavy blows off the bat with Adesanya tagging him back. With them still going back and forth for another minute, at 3 minutes and 21 seconds left in the round, Ehittacker found his way back onto the champion’s back while they were standing trying to submit him. Though, this did not work. During the end of round four, the judges showed the amount of significant strokes with Adesanya having more for each round so far. With the fifth round being a back-and-forth similarly to each other round, the fight came to an end with Adesanya’s hand being raised and him keeping his championship title.

During the post-fight interview, Robert WHittacker stated that everyone else is a league below him and Adesanya and he would quickly make his way back up to the title fight to be able to have his trilogy fight with the reigning champion Israel Adesanya. When it was Israel Adesanya’s turn to speak he did not fully agree with Robert Whittacker. Adesanya stated that though he believed that they both were levels above everyone else, he was still a level above Whittacker stating that nobody is close to his ability or close to taking his title away from him. Adesanya also added that he believes he will see him later down the line for a fight but that would not be anytime soon. Israel Adesanya had backed up what he had just said with his earlier performance by defending off 6/10 takedowns, getting an early knockdown on Whittacker, landing 98/188 strikes, and landing 79/169 significant strikes. Though he did not defeat Whittaker via Knockout, he still showed why he was the top dog in his yard.