Kettle Run Alumnus on Deck for the Major League

By Shelly Norden and Emma Gray

A former Kettle Run baseball player is headed to the major leagues.

On June 4, Brenton Doyle , Kettle Run Class of 2016, was drafted by the Colorado Rockies. Doyle was at home in Warrenton watching day two of the draft when he got the call. “My adviser called with the good news,” Doyle said. “I didn’t have time to call or text anyone. Everyone knew I had been drafted and they started blowing up my phone.”

Doyle was the first DII player to be selected in this year’s draft. Just a few days after the draft, he was on a plane headed to Grand Junction, Colorado where he will don a Grand Junction Rockies jersey.

“I’m looking forward to being able to play at the next level and improve my talent,” Doyle said. “I’m going to keep working hard and work my way up the minor league system and eventually the major league system.”

Doyle, who just finished his junior year at Shepherd University, had two great years on the DII team. “Putting up really good statistics in college and summer ball is what got me attention,” Doyle said. His success on these teams garnered the attention of, not one, but six major league teams.

Ty Thorpe, Doyle’s high school coach, was not surprised when the calls started coming in about his former athlete. “Most of the questions they have been asking me are very generic; wanting to know about the kind of person he is, his work ethic, family life, and hobbies and interests,” Thorpe said.

Thorpe added that Doyle’s success was hard earned. “Brenton was, and still is, a very fiery competitor,” Thorpe said. “He pushed himself hard and put a lot of time in on his own to get where he is today. Brenton was a good student athlete. He was able to balance his classes and time on the field.”

Doyle’s primary position is outfield, but he also plays second base, and shortstop, He spent the last two summers playing for Wilson TOBS, one of 16 teams making up the Coastal Plain League. “Last summer was the best summer of my life,” Doyle said. “It’s a very popular summer league so the fans at each game were unlike anything I’ve played in front of before. Some nights we would have up to 2,000 fans. The league also included some of the best college players in the country, so I was able to face better competition and further develop my skills.”

Doyle had his first taste of success in baseball during his freshman year of high school. “He cracked the starting lineup midway through his freshman year,” Thorpe said, “and he never looked back.” Doyle helped lead his team to Kettle Run’s first appearance in the Virginia state baseball tournament; he was named the team MVP his senior year; he was also named to the All-District, All-Region and All-State teams during his junior and senior years.

“Brenton played with some very talented guys, but he led us in most offensive categories his senior year,” Thorpe said. “He also is a very strong defensive player; he can get to most fly balls that others can’t, and he has a very strong arm.”

Doyle credits Thorpe for helping him discover his love of the game. “You often hear stories about high school coaches ruining sports for athletes, but that isn’t the case with Thorpe,” Doyle said. “He cares about his players on and off the field and he has always pushed us to bring out the best in each other, whether it was as a person or a player.”

As he moves up the baseball ladder, Doyle carries memories of his time playing high school ball with him. “Kettle Run brought a lot of incredible experiences and memories into my life,” Doyle said. “I was fortunate enough to play with an incredible group of guys, and I was lucky to call them my friends. On the day of graduation, we had one final home game against Fauquier and then went on to graduate later that day. It feels like that was just yesterday.”

For athletes hoping to follow in his footsteps, Doyle had some advice. “Do not let anyone ruin the love you have for your sport,” Doyle said. “You fell in love with that sport for a reason and the opinions of others shouldn’t change your aspect of being an athlete and playing the sport that brings you happiness.” 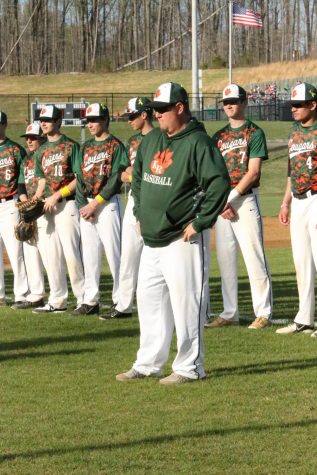 photo by Victor O’Neill StudiosStanding behind Coach Ty Thorpe, Brenton Doyle (7) and his team prepare to take on Liberty High School in the spring of 2016. This was Doyle’s senior year.